This small company was established by William Bragdon and Chauncey Thomas, both well-educated and talented ceramic artists, who both taught at the California School of Arts and Crafts in Oakland, CA.  They were successful in making quality tiles and pottery and selling them to a high-end market across the US. The pottery was generally one color, and the tiles were hand-pressed in plaster molds with bright, multicolored patterns. Early tiles before 1920 were often made with matte glazes for California bungalows. After 1920 there were more highly glazed tiles in bright colors to go with the Spanish colonial houses. Their most celebrated project was the famous Hearst Castle in 1927. Dirk Van Erp, the highly celebrated Arts & Crafts master of metalwork, encased many of the companies’ tiles in copper for bookends and trivets. California Faience was among the most aesthetically refined and financially successful art potteries in the state’s history. From its inception, the company remained in continuous operation until 1950 producing custom commissioned work as well as its own widely varied and distinctive line of highly crafted, handmade tiles. 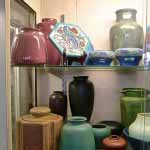 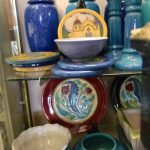 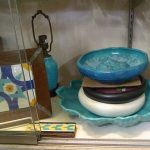