From the mid 1920’s through the 1940’s Brayton Laguna Pottery was both an innovative and influential force in the ceramic industry of Southern California. Founded in 1927 by Durlin Brayton (1897-1951), a graduate of the Chicago Art Institute, the pottery produced earthenware dishes, pitchers, large serving bowls and figurines.   Brayton created his own glazes for these hand-turned pieces in colors never used before: rich purple eggplant, old gold, lettuce green, burnt orange, burgundy, turquoise and a silky black and white.” From 1938-1940 Brayton Laguna became the first pottery licensed by Walt Disney Studios to produce figurines of Disney’s animated characters. By the end of World War II the pottery had sales representatives in every major US city as well as many cities overseas. During this period, the pottery employed 150 potters, helping to create a major ceramics center in Southern California.

We are always adding to our Brayton inventory, especially tiles and their early dish ware.   Scott Wells has been collecting early Brayton pieces since the 1990’s.   It’s one of his favorite potteries. 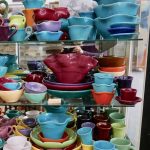 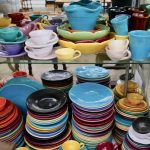 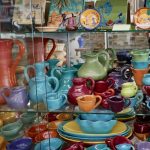