Made in Delft, The Netherlands   Circa 17th/early 18th Century

This rare Dutch hand-painted blue and white tile has the characteristic thick depth, rich glaze, peppering, bold “Ox Head” corner decoration, and refined painting that are hallmarks of early Delft ware.   This tile depicts a man and a woman in a beautifully detailed pastoral landscape. The somewhat ambiguous subject of the scene is probably derived from aBiblical, historical, or literary precedent, however our research has not been able to pinpoint the exact source. The Netherlands began to produce tin-glazed earthenware in the late 15th Century. By the late 17th Century Delft had become the most prominent center of production in all of Europe and its wares were highly prized for their beauty, technical achievement, and accomplished artistry. 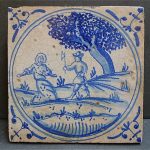 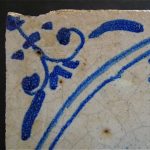 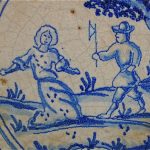 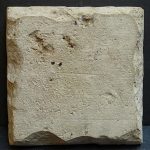 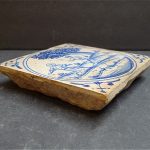