Russel Wright was an American Industrial designer during the 20th century. Beginning in the late 1920s through the 1960s, Russel Wright created a succession of artistically distinctive and commercially successful items that helped bring modern design to the general public.  He had a short stint with Bauer/Atlanta in the 1940’s designing dishware and unique ceramic pieces.   Here for sale is his long centerpiece/fruit bowl with a candle holder formed at each end.   Wonderful satiny glaze is white with specks of green and gray.  Not shown is another one with Atlanta Brick glaze; it has some firing cracks from the kiln.  If interested in photos, contact us-priced accordingly. 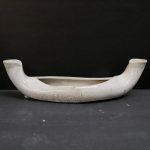 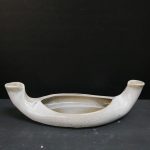 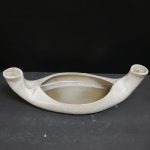 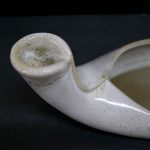 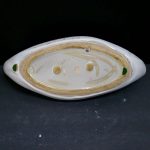